Read a press release from the Colorado State Forest Service

What is the Emerald Ash Borer?

An invasive insect responsible for the death or decline of tens of millions of ash trees in 21 states has been detected in Colorado for the first time.

A suspect tree was spotted in Boulder County on September 23, 2013, by City of Boulder Forestry staff. Insect specimens from the ash tree were collected and sent to the United States Department of Agriculture (USDA) Systematic Entomology Laboratory where the identity of the insects was confirmed.

"The confirmation of these specimens as emerald ash borer (EAB) marks the western-most occurrence of this invasive pest in North America," said Patrick McPherren, USDA State Plant Health Director in Colorado. "To date Colorado is the fourth State to detect EAB in 2013."

"The first step will be to determine how widespread its presence is," said CDA's Plant Inspection Division Director, Mitch Yergert. "We have a plan in place to quickly respond in order to protect Colorado's ash trees."

Additional steps will involve initiating a quarantine in the regulated area to prevent the movement of all ash tree products and hardwood firewood. The Colorado Department of Agriculture will also expand efforts to detect the destructive bug. CDA has been trapping for EAB for five years; additional efforts will now include bark inspections and tree sampling. Officials will also step up education and outreach efforts.

The emerald ash borer (EAB) is a small, green metallic beetle first detected in North America in 2002 in southeastern Michigan. The emerald ash borer attacks only ash trees and all ash species – including green, white, black and blue – are at risk. Signs of emerald ash borer infestation include a general decline in the appearance of the tree, thinning of upper branches and twigs, loss of leaves, and serpentine tunnels produced by EAB larvae under the bark. Woodpeckers may often be observed removing the bark of infested trees to access the larvae.

EAB has killed over 50 million ash trees since its initial discovery in Michigan in 2002. In the last ten years the small green metallic colored pest, originally from Asia, has spread from Michigan to 21 states, including Colorado. Ash trees are popular in Colorado with an estimated 98,000 in the city of Boulder alone; the Denver Metro area has an estimated 1.45 million ash trees.

"The public can play a vital role in preventing the spread of this destructive bug by simply not moving firewood," said Yergert. "EAB larvae can survive underneath the bark of ash firewood, and when it's moved from one place to another, the pest can hitchhike to a new location. Furthermore, it's important to note that trees begin to decline a bit during fall months but there are certain features of a EAB-infested tree that residents can look for."

It is possible that EAB could infest an ash tree for 3 or 4 years before visible signs of decline of the tree. If an ash tree is experiencing die back or looking unhealthy, residents are encouraged to have it examined by a professional tree company, contact CDA, or their city or county forestry office.

For five years, CDA has been conducting EAB early detection activities through the Cooperative Agricultural Pest Survey (CAPS) program. The project is in coordination with the US Department of Agriculture, Animal and Plant Health Inspection Service, Plant Protection and Quarantine (USDA-APHIS-PPQ), Colorado State Forest Service (CSFS) and City Foresters from 27 communities on the Front Range. Targeted surveys, trapping or sampling, are conducted annually to detect pests that are likely to be introduced to Colorado via commerce, human travel or natural spread.

If you think you have EAB in your ash trees, or if you have any questions or concerns, or would like additional information, please contact the Colorado Department of Agriculture at 888-248-5535 or email CAPS.program@state.co.us. 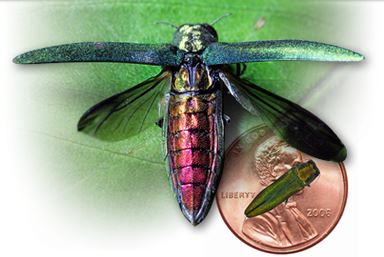